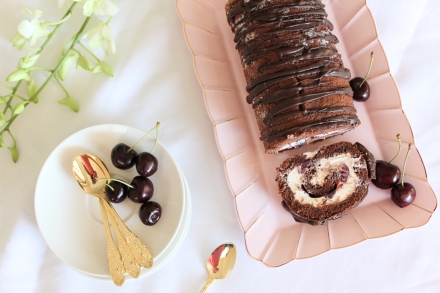 I like to try to get creative in my kitchen.  I love to bake for my family.  It helps that my family loves to eat.

I like to bake every weekend trying new recipes and new ingredients. I am fortunate at times when I get approached to try new products.  Sometimes the products have been around for a while however, a new range have been launched.

The new Anchor cream range is made with 100% Australian dairy and is designed with foodies and cooks in mind.  The bottles come in unique sizes. 1 cup (250ml) and  2 cup (500ml) and has markers on the side of the bottle to ensure precise pouring.  This all helps following a recipe be hassle free.

Anything that makes my baking easier is always welcomed in my kitchen.

To mark the launch of the new Anchor range, I have come up with a recipe that I want to share with my readers. 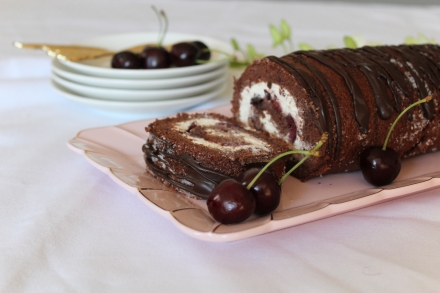 Platter and 3 tiered cake platter used in this post are Maxwell and Williams blush range.

The New Anchor cream range can be found at your local Woolworths. 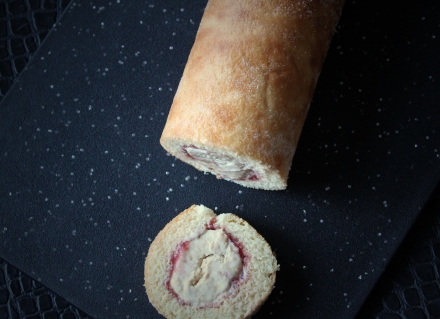 Even though it’s the middle of winter here in Melbourne, I can’t resist a large bowl of ice cream, especially if it’s Harry’s Peanut butter fudge or triple choc brownie.

After chocolate, ice cream was voted as one of Australia’s top comfort foods that makes us feel better.  Australians like to turn to comfort food to forget about the bad day they just had or to temporarily forget the daily stresses they face.  For me, I like to wind down after a long day at work by sitting under a cozy blanket on the couch in front of the TV while eating my way through a tub of ice cream.

This was Hubby’s idea.  He used to have these growing up in England.  I have to say, it wasn’t a thing here in Australia but it should’ve been!

It’s easy so you don’t really need a recipe for it.  You can layer anything you like.  I set some jelly at the bottom of the glass and also set the remaining in a separate bowl.  When ready to serve, I layered a scoop of vanilla ice cream, strawberry and chocolate syrups, meringue, more jelly and of course, Harry’s ice cream triple choc icream.  I topped with whipped cream (from a can, I know, the horror!).  Garnished with a glace cherry, a wafer and a Flake.

Next I created the peanut butter and jelly arctic roll.  This is another ice cream dessert that I didn’t know much about until my adult years.  An arctic roll is a British dessert, traditionally made of vanilla ice cream wrapped in a thin layer of sponge cake, which has raspberry sauce spread onto it.  I chose to use Harry’s peanut butter fudge ice cream.  You can use any ice cream flavour you fancy, really. 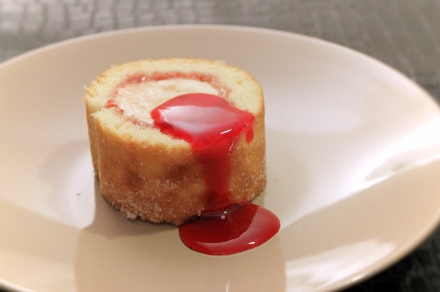 To celebrate ice cream month, Harry’s ice cream co is delivering ice cream to people who are in need of an ice cream emergency.

Tell Harry’s Ice cream Co why you’re screaming for ice cream and you could find an emergency supply of Harry’s Ice Cream delivered to your doorstep.

To Enter: Write on Harry’s Facebook wall or upload a photo to Harry’s wall describing your ice cream emergency and hashtag with #HarrysIceCreamCo and #IceCreamEmergency

Check out their Facebook page here for more details.

Cake.  There always has to be cake in my house.  I’m constantly looking for different recipes to try.  I’m glad I found this one by Rachel Allen. 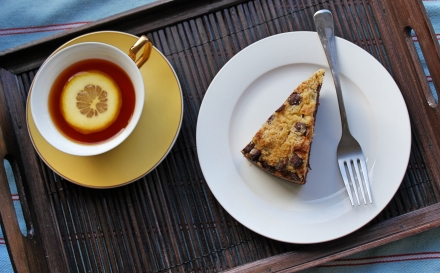 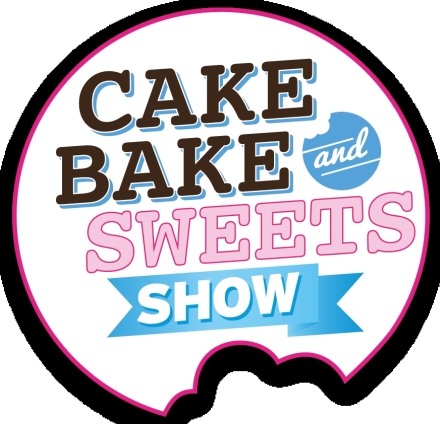 The inaugural Melbourne Cake Bake and Sweets Show will take place at the Melbourne Convention and Exhibition Centre on the 3rd to 5th October 2014.

If you have a passion for baking, like myself, or just eating sweets, like Hubby, then you’ll want to head to the event which is devoted to all things baking and the art of baking.  Guests will get the chance to see a line up of some of the best international and home grown baking stars.  Guests like US celebrity chef and TV star Buddy “Cake Boss” Valastro, and one of Australia’s favourite patissiers, Adriano Zumbo, will have live demonstrations.  You can learn all the tricks of the trade. 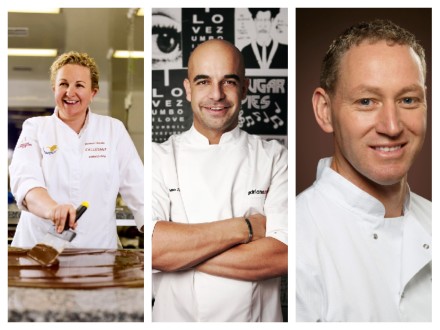 At the show you can shop till you drop, taste till you’re full and watch demonstrations or take part in workshops to become an expert.  For tickets and more information visit their website http://www.cakebakeandsweets.com/melbourne/

I’m happy to announce that I have 4 double passes to give away to this fantastic event and it’s easy to enter.  I will choose the winners randomly and contact successful readers via email so please make sure you provide a valid address.

COMPETITION IS NOW CLOSED AND I HAVE CHOSEN THE WINNERS.

The winners have been contacted by Email.

Congratulations to all the winners! 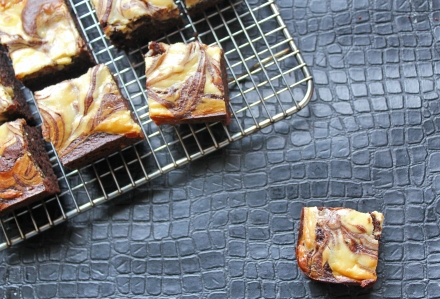 When normal brownies are not indulgent enough.

I love this recipe.  I’ve made it a couple of times already as the family loves it.  It’s a Rachel Allen recipe.  I like homely comforting bakes, especially on a slow sunday afternoon.  It fills the house with a lovely aroma. 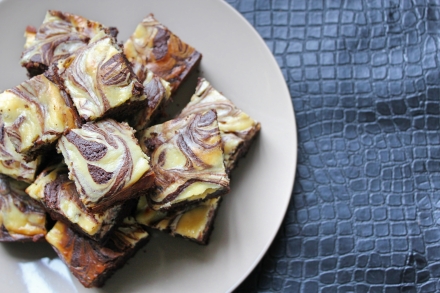 Do you know it’s International Ice cream month? No? well, you do now…

It just so happens July is also Deanna’s birthday month. What better way to celebrate than having an ice cream party. It doesn’t matter if it’s the middle of winter here in Melbourne, ice cream is always welcome with my family.

Deanna was lucky enough to create her very own flavour to celebrate. Harry’s ice cream asked us to create a flavour that they would make for us in their factory in Brunswick. After many discussions between Deanna and myself, we came up with… 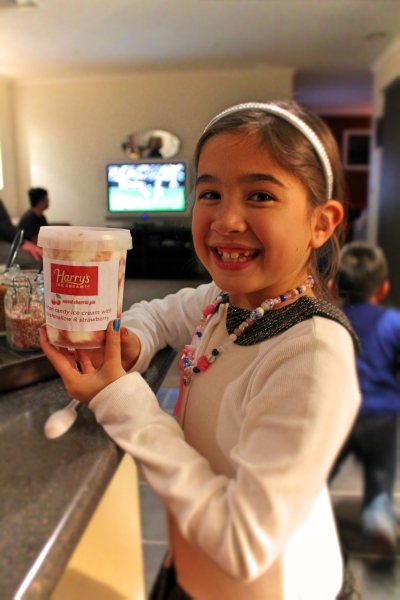 Cotton Candy ice cream with marshmallow pieces and strawberry swirl. It definitely is a fun flavour with a touch of a princess 🙂

Along with the Cotton candy ice cream, we were also sent Pavlova and sticky date flavoured ice creams. O.M.G. that sticky date! I had various toppings that our guests were able to add. 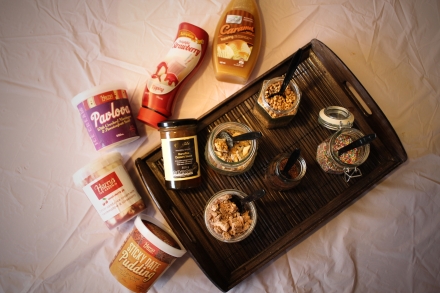 We had our family over to help celebrate and had lots of fun doing it.

Thanks to Harry’s Ice cream, we were able to have our creation made up in a couple of weeks. It usually takes 6 months of research to develop their perfect flavours before it hits the freezer shelves of Woolworths supermarkets. You can see Harry’s full range here or you can also see my recipe of Leche Flan Ice cream using Harry’s base ice cream recipe here. 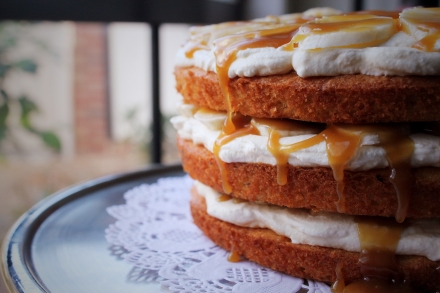 I think you all must know by now how much I love to bake.  I try to bake at least once a week for my family.  It can be anything from bread to cakes and cupcakes and of course everything in between.

Last month, I invited a group of other food bloggers for a bake off pot luck.  Everyone had to bring a savoury bake and a sweet show topper.  We were all a little nervous and the flurry of tweets and instagrams ( #GFBBO) prior to the gathering showed just that. But just like every other food blogger pot luck, everyone delivered the goods (literally).

For my savoury bake, I baked Paul Hollywood’s bacon and cheddar loaves.  I’ve baked them before and you can find the recipe here.

I decided to bake a Banana fudge layer cake. I got the recipe from the Great Australian Bake Off cook book but it is also featured in the Great British one.  I just made a tiny change. I added whipped cream in between the layers. I thought it just lightens the whole cake.  This cake is perfect for occasions as it looks spectacular but most importantly, it’s not difficult to make. 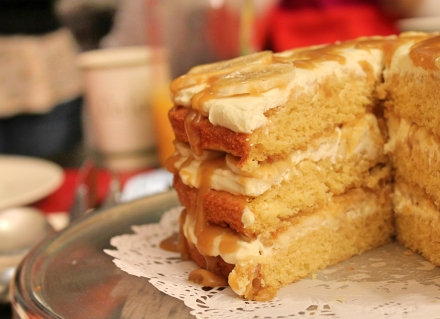 For the filling and topping:

Tip: For even cake layers, weigh the cake batter and divide evenly into thirds. 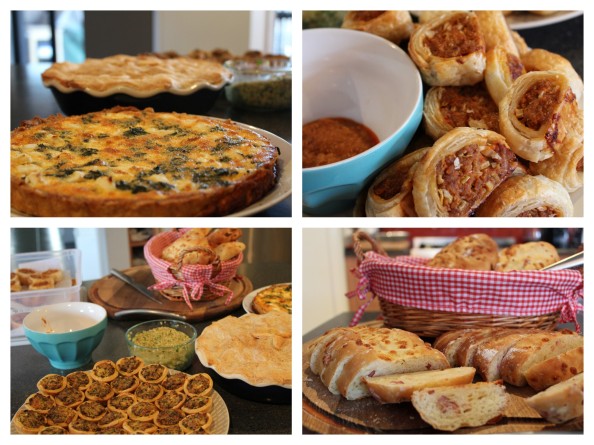