This month’s theme for our Kulinarya Cooking Club is “Only in the Philippines”. Tina from Pinay in Texas Cooking Corner and I are hosting this month and we wanted to focus on unique dishes that can only be found in the Philippines.

Being a Filipina, I love my rice. Growing up, it would be normal for me to have rice three meals in a day. So I thought it natural for me to chose a rice dish for the theme.

I love rice for breakfast. To make a complete meal, add egg and a meat.

What makes this dish unique to the Philippines is the name. Tapsilog. Filipinos like to abbreviate or replace words with acronyms. Tapsilog comprises of Tapa (Tap) sinangag (si) and itlog (log).

Tapa is cured beef. It’s beef that’s been marinated overnight and in some cases, dried then fried. I like my tapa not dried as it can get tough and chewy when not done right. I left out the drying step.

Sinangag is garlic rice. I love it. It’s rice that has been fried with lots of garlic.

Itlog is egg. An oozy, runny egg is essential for this dish.

Marinate the beef with the rest of the ingredients. Leave overnight or at least 4 hours.

To cook: in a large frying place the beef and marinade in. Let the beef simmer in the marinade until it dries out. Add some vegetable oil to the pan and gently fry until slightly browned and cooked through,

To cook: cook the rice by absorption method. When cooked set aside to cool a bit. You can also use left over rice from the day before. When ready, add a little vegetable oil in a wok and gently fry the garlic till lightly browned. Add the rice and mix thoroughly and add the salt. Turn the heat to low and leave the rice to fry a little and for the garlic to infuse through. Mix every couple of minutes.

Fry the egg to your liking. 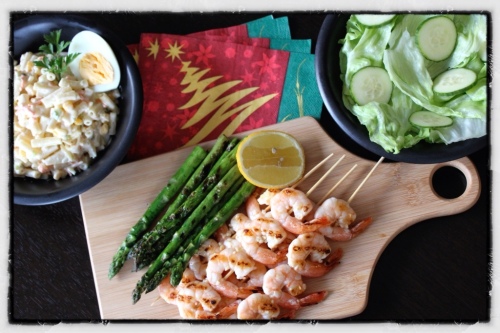 This month’s theme for the Kulinarya Cooking Club is Noche Buena. A Noche Buena feast in the Philippines is a grand family affair on Christmas eve.
I love a feast. I love a feast even more during Christmas. Typical food that is served up on Christmas eve is lechon (roast suckling pig), pancit (noodles) and hamon (ham). Food seems to be more special during this time of the year, even the most simplest of dishes like barbecued prawns marinated in lemon and lime.

Growing up in Australia meant that our Christmas is during the Summer. Unlike the white Christmases of our American and English friends, Australians enjoy the balmy evenings standing next the barbeque on Christmas eve. As a Filipino Australian, my love for seafood is doubled. So what better Noche Buena dish to cook than barbequed prawns. I served my prawns with a big bowl of pasta salad, Filipino style.

There really isn’t a recipe for this as the prawns are simply marinated in lime juice and olive oil for about 30 minutes then barbequed for a couple of minutes on each side. The pasta salad is macaroni with mayonnaise with carrot, corn, pineapple, cucumber and cheese. Yum! I loved these growing up and as an adult, I still love it. No Filipino feast is complete without it.

I’m looking forward to this year’s Noche Buena at my parent’s house. I know there will be a great feast with my family.
Please check out everyone else from the Kulinara Club cooked up for their Noche Buena feast here.

Kulinarya was started by a group of Filipino foodies living in Sydney who are passionate about the Filipino culture and it’s colourful cuisine.  Each month we will showcase a new dish along with their family dishes.  By sharing these recipes we hope you find the same passion and love for Filipino food as we do.

This month’s theme is : colours of the Philippine flag. Red, white, yellow and blue.

This theme was very challenging.  All colours need to be represented in the dish without using artificial colouring.  We were allowed to use one colour as a prop.  I decided to make crema de fruta.  It had most colours of the flag: red, white and yellow and it is delicious.  It’s a cake topped with custard then covered with fruit.

I’ve made cream de fruta before many years ago. I’ve forgotten how good this tastes.  For the cake, I used my brown sugar sponge. I just used half the recipe, though you can bake the full recipe and freeze one of the cakes.

Fruit topping:
To assemble the cake:

Kulinarya was started by a group of Filipino foodies living in Sydney who are passionate about the Filipino culture and it’s colourful cuisine.  Each month we will showcase a new dish along with their family dishes.  By sharing these recipes we hope you find the same passion and love for Filipino food as we do.

Thanks to Sefie from Sefie Eats Blog and Connie from Home Cooking Rocks Blog for choosing this month’s theme.  Flores De Mayo means flowers of May.  It is a Catholic fiesta that is celebrated throughout the month of May to honour the Virgin Mary.  At the end of the celebrations a parade is held, known as Santa Cruzan  in all the towns and villages.

I think it had quite a lot of us from the Kulinarya Cooking Club stumped. I had no idea what was going to do and then I had a lightbulb moment.

I decided to make jelly. Not just any jelly but Filipino style. Our jelly is not the same as the jelly that most people are used to. Ours has evaporated milk in it and for flavor, I added coconut milk. The texture is also different. It is not as wobbly. It is more thicker and creamier too. This dessert is mostly found at all Filipino parties and I remember my mum making this many times for our family gatherings. My mum sometimes put cocktail fruits from a can in it but I decided to leave it out this time but I’ll definitely put it in next time I make it.

For the setting agent, I used agar agar. I had used this only once before when I made coconut noodles. I used a small bundt cake tin as it kind of looked like a flower. I also made one with pandanus essence. I love the taste and texture of the jelly. I will definitely make this again. 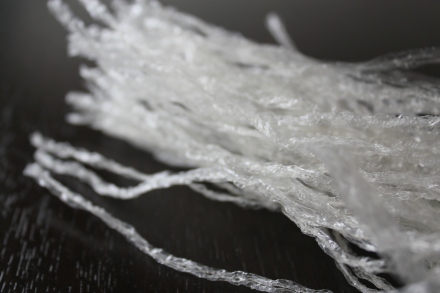 1. Place the water, sugar and agar agar into a pot.  Simmer until the agar agar has dissolved.

2.  Add the evaporated milk and coconut milk.  At this stage you can taste it.  You may add more sugar if you like it sweeter.

5.  When set, remove from the moulds.  You may need to dip it in a some hot water to loosen a little.

You can check out what the members of the Kulinarya Cooking Club cooked up for this month’s theme here.